A professor in the Department of Astronomy at Boston University, Prof. Merav Opher is interested in understanding the cocoons around stars, called astrospheres and generated by the stellar winds as they move through the interstellar medium that surrounds them. In particular, her research focuses on understanding the heliosphere, the cocoon around the solar system, and creates the foundation to predict habitable astrospheres. 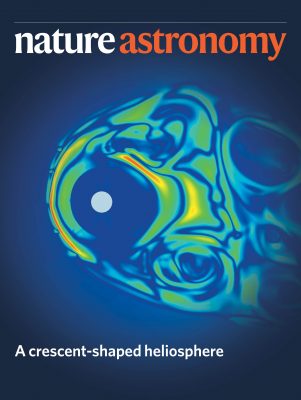 In 2022 at Radcliffe, Professor Opher continued her groundbreaking heliospheric research. She is tackling questions such as: what is the shape of the heliosphere—is it a long-tail comet-like shape as described in the classic view, or is it a croissant-like shape as her recent work suggests? And what is the physical mechanism driving the shape? Understanding the shape of the heliosphere is the first step to grasping the shielding properties of the heliosphere. The outcomes will provide foundational knowledge for the broader astronomical community to apply understanding of the only known habitable astrosphere to other stars. Through this work, Professor Opher dares to ask and search for the answer to the question, “are we alone in the Universe?” Her results will allow scientists to predict which other stellar systems have the potential to harbor habitable Earth-like planets.

Professor Opher has had a decorated career, winning numerous awards including a 2007 Presidential Early Career Award for Scientists and Engineers and a 2008 Faculty Early Career Development Program award. Recently, she became the principal investigator of the SHIELD DRIVE Science Center, a NASA-funded center with more than 40 leading scientists across a dozen institutions.

Professor Opher also has an extensive service to the community serving in many capacities and on several major panels in NASA, such as NASA Heliophysics Mission Senior Review Panel, 2015, 2017, 2020 that judges the portfolio of missions of NASA. She is an Editor, Geophysical Research Letters and served in the 2013 Solar and Heliophysics Decadal Survey. She was also the chair-elect of American Physical Society (APS) Topical Group in Plasma Astrophysics (2017-2018)